No. 20-03:
Robin J. C. Adams, and Vaida Nikšaitė
'Diaspora Finance: Ethnic fundraising in America and the Irish and Lithuanian Wars of Independence (1919-1921)'
April 2020
This paper examines the fundraising tactics of two self-proclaimed nation states in the immediate aftermath of the First World War: the unrecognised Lithuanian (1919-23) and Irish (1919-21) republics. Both republics funded their wars of independence by selling ‘war bonds’ to their respective diasporas in the United States. Unlike the war bonds of the First World War, the Lithuanian and Irish bonds promised a return only when the states had received international recognition. In this sense, they can be described as ‘Pre-Sovereign Debt’. Practically, they were a focal point for rousing American public opinion. Symbolically, they were tangible representations of the Lithuanian and Irish pretensions to statehood. By comparing the Lithuanian and Irish republics’ fundraising in America, this paper sheds light on the histories of both wars of independence. Moreover, by introducing the concept of ‘Pre-Sovereign Debt’, it makes a contribution to the field of Economic History. 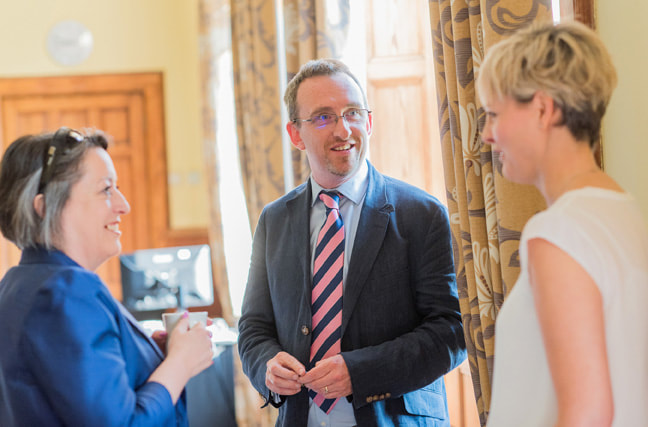 QUCEH Director John Turner at recent QUCEH Economic History Impact Initiative event at Riddel Hall
Graduate Study
Queen's Management School offers a one-year MSc programme in Economics. The programme has an Economic History track, and offers all the necessary training to pursue a PhD in an economic history research topic. Applicants must hold a prior degree in economics or a related subject, and have achieved at least an upper second class degree classification at undergraduate level. More details are found here.
​

c.hickson@qub.ac.uk
Charles Hickson (PhD, UCLA) is a retired Senior Lecturer in Finance at Queen's. He has a research interest in monetary and financial history.

ting.xu@sheffield.ac.uk
Ting Xu (PhD, LSE) is a Senior Lecturer in Law at the University of Sheffield. Before this, she was a Lecturer in Law at Queen's. Among other things, she works on Chinese institutions from a historical and comparative perspective.

lwhite11@gmu.edu
Larry White (PhD, UCLA) is Professor of Economics at George Mason University and a Senior Scholar at the Mercatus Center. He teaches and researches monetary theory and banking, and is an expert on the Scottish banking system in the nineteenth century.

Wenwen has a PhD from Queen's and currently works as a Research Analyst for China Merchant Securities (HK).